D-Jetronic components have largely become rare and sometimes very expensive. Therefore many parts are offered and installed, which do NOT fit to the D-Jetronic installed at Volvo.

Therefore always make sure you have the correct Bosch number and consult it for identification.

See and compare the numbers in the Bosch Equipment List.

The following parts should be placed in personal storage as a precautionary measure and procured at parts markets in case of possible slaughter:

The control unit processes the input values of the various sensors and controls the injection valves.

In versions 1. and 2. the Cold Start Valve is still controlled by the Control Unit (ECU) via an extra relay. Max. 7 seconds.

Remark:
When using the ECU with version 3 it is absolutely necessary to add a TTS for a correct cold start.

The auxiliary relay is not required. Only two relays remain in the engine compartment. (Main and Pump Relay)

Important Note:
The main relay may ONLY be replaced by the original with blocking diode and marked with a blue dot, Bosch 0 332 003 025 Here “NEVER” use a normal working current relay. Risk of damage to the control unit (ECU).Arbeitstrom-Relais nehmen. Gefahr für die Beschädigung des Steuergerätes (ECU).

Signal inputs:
The intake manifold pressure is sensed by the Pressure Sensor. The different outside air pressure is also recorded by the barometer box. This also results in height compensation.

Water temperature is measured by the water Temperature Sensor II.

In addition, the speed signal via the trigger contacts (bit) in the lower distributor.

The throttle Position Switch (TPS) supplies the idle signal (CO setting on the potentiometer) and the signal for thrust cut-off) and,

as well as signals for TPS and movement (acceleration and deceleration).

The injection valves are only activated, when the signal from the trigger contacts (bit) in the lower distributor comes when the engine is started. At the same time the fuel pump is activated.

The roller cell pump of the wet type, delivers permanently fuel under the following conditions:

It controls the system pressure to a constant value. The regulator is equipped with a diaphragm (pressure membrane adjustable). Excess fuel is returned to the tank via the return line.

In the VOLVO 1800E/ES, the Temperature Sensor I for intake air (NTC1) is installed in the engine compartment at the rear edge of the air filter housing (installation thread M8) and measures the temperature of the incoming air. However, it has little influence on the mixture.

The Temperature Sensor II for coolant water (NTC2) is screwed into the cylinder head between the manifold suction pipe and the additional air slide (screw-in thread M10x1), and measures the temperature in the coolant circuit.

Note:
In the Volvo 1800E, a temperature sensor was first installed in a steel housing from September 1969 (Bosch 280 130 009). After a few months there was a recall action, because the sensor was faulty and there was a malfunction in the engine running. A new sensor in a brass housing was introduced in January 1970 (Bosch 280 130 014). The insulator with the plug connection is now dark brown instead of black. These colors are difficult to distinguish. The safe method: Use a magnet to check whether a sensor with a steel or brass housing is installed. The correct sensor can also be identified by the embossed Bosch number 014.

The trip contacts (RPM detection) are mounted on a U-shaped plate. The construction reminds optically of a set of teeth (“bit”). They are located at the bottom of the ignition distributor with separate access and are actuated by two cams.

They trigger the injection valves in two groups:

It injects additional fuel during cold starts (up to max. 35°C) as long as the starter is running.
Max. Injection time 7 seconds.

Up to model year 05.1971 the control unit is controlled by a relay. From model year 06.71 on: Control via a thermo timer switch without relay.

The switching is done by the thermo timer (retrofit when replacing the control unit from 06.71 on) see also information in the paragraph above.

If the temperature of the engine is above 35°C the thermo timer does not switch on the cold start valve anymore. A perfect cold start is only possible with a correctly functioning thermal timer switch.

The Injection Valves are clocked in the milisecond range. An increase in the clock rate results in a richer mixture.

The voltage between the two connections on the valve is in the range of 0.3 to 4.0 volts.

Attention! Never drive valves directly with 12 volts, otherwise they will go out.

The throttle Valve Switch (TPS) is screwed to the intake socket of the collecting suction pipe and is controlled directly by the throttle valve shaft. The shaft actuates a rotor in the switch (sliding contact slides over the contact comb). The TPS is connected to the cable harness of the D-Jetronic with a 4-pole connector.

The switch has three functions:

The Thermal Timer Switch (TTS) receives +12V from the contact on the magnetic switch when starting. This switches ground via a bimetal spring to the cold start valve. As soon as starting , the bimetal spring is heated by a heating resistor. Depending on the output temperature up to 7 seconds. If the bimetal is heated or the ambient temperature is higher than 35°C, the cold start valve does not need to be activated. The bimetal spring then switches off the ground. You can find further information under modifications.

With old control units (until 05.1971) the cold start valve is controlled by the temperature value of the water temperature sensor. The installation of the newer version (from 06.1971) is possible, but an additional thermo timer switch must be installed and wired.
You can find further information under modifications.

With the old version there are three relays in the engine compartment, from 06.1971 on only their two.

Note:
To test the injection pump, the connections 30 and 87 on the pump relay can be disconnected and then short-circuited with a bypass.

The Auxiliary Air Regulator is a valve operated by a wax thermostat, which opens an orifice when the engine is cold in order to increase idle speed via a bypass. It is located in the water circuit at the cylinder head and closes when heated.

It is now available again (but at an exorbitant price), but can be replaced by the electrically heated auxiliary air slide of the K-Jetronic from the B21 and B23E. The +connection of the electrically heated additional air slide of the K-Jetronic has to be connected to the output of the pump relay (contact 87). Connection ground at the intake manifold.

There should also be the wax thermostat separately again. Hermann Ebner: h.ebner@spitzenberger.at, takes over the installation in the ZLS. The defective ZLS can be sent in and Hermann Ebner will draw for a competent conversion in the exchange procedure.

Contrary to other unqualified assertions, the ZLS “only” influences the engine speed, it does not lose weight, nor does it have any influence on possible false air.

Replace the fuel filter. Change interval used to be 40,000 km.  If the flow rate is too low, the mixture will lean out around the top RPM.

Change more often if the tank is left standing in the cold season, because the fuel additives attack the tank.

Influences of the positioning value transmitters

As soon as starting the engine, the control unit receives pulses from the trigger contacts under the distributer. It switches on the fuel pump and trigger the injection valves, depending on the intake air, engine temperature and pressure sensor switch values.

Since the pressure sensor values are stored in the control unit, every camshaft change (especially with very sharp shafts) is noticeable. Since the vacuum values change into the negative due to other control times, the injection program is no longer correct. Therefore please use only the standard D-shaft for B20 E/F. (164: C-shaft), otherwise there could be trouble. 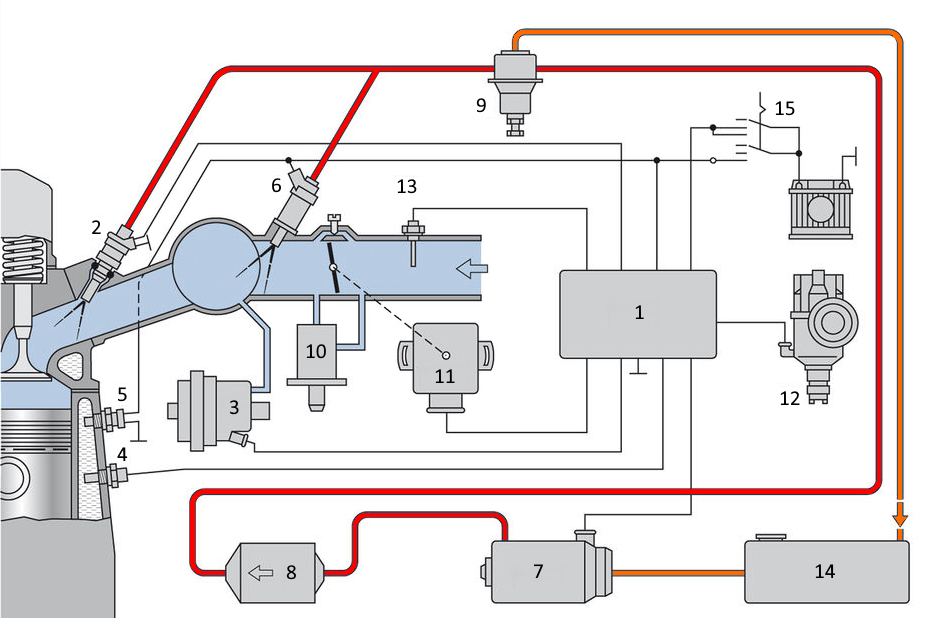 The main relay (15) may only be replaced by an original with “BLUE POINT”.
This contains blocking diodes to protect the control unit.

For the replacement components, where appropriate, always compare the original Bosch number first and then the VOLVO part number.